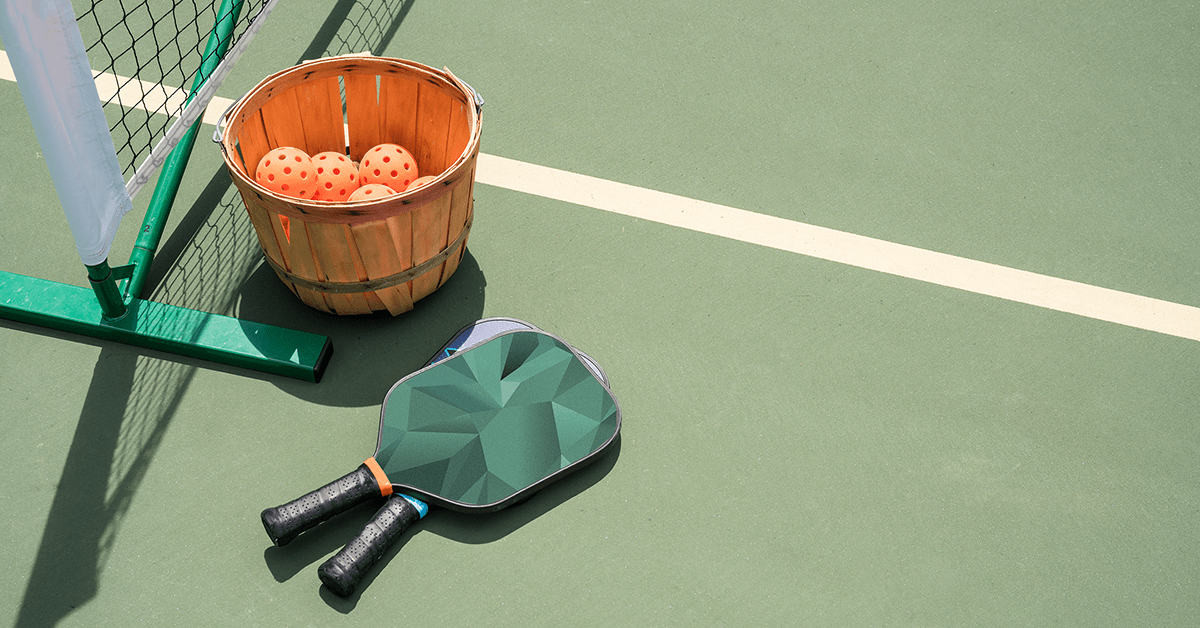 Pop quiz: What’s the fastest-growing sport in the United States?

Pat yourself on the pack if you guessed right. No, it’s not rugby. Nor is it lacrosse. And despite World Cup fever gripping sports fan all over, it’s not “the beautiful game,” either.

Yes, you read that right. Pickeball. You’re not alone if you’ve never heard of it, but if the reports are to be believed, you soon will be. (There’s even a Pickleball Association and a Pickleball Channel!)

In case you are wondering, pickleball is a hybrid of three racket sports — tennis, ping-pong, and badminton — that is played on a badminton-sized court.

Why is it called pickleball? The prevailing story is that the game was named after the dog of one of the founders, a cocker spaniel named Pickles, who loved chasing after the balls. (A competing story is that the wife of one of the founders started calling the game pickleball because “the combination of different sports reminded me of the pickle boat in crew where oarsmen were chosen from the leftovers of other boats.”)

Which brings us to the crux of this curious sport and something most parents can relate to during the dog days of summer: How to entertain kids bored with their usual summertime activities.

As the story goes, pickleball was invented one summer’s day in 1965:

“After playing golf one Saturday during the summer, Joel Pritchard, congressman from Washington State and Bill Bell, successful businessman, returned to Pritchard’s home on Bainbridge Island, WA (near Seattle) to find their families sitting around with nothing to do. The property had an old badminton court so Pritchard and Bell looked for some badminton equipment and could not find a full set of rackets. They improvised and started playing with ping-pong paddles and a perforated plastic ball. At first they placed the net at badminton height of 60 inches and volleyed the ball over the net. As the weekend progressed, the players found that the ball bounced well on the asphalt surface and soon the net was lowered to 36 inches. The following weekend, Barney McCallum was introduced to the game at Pritchard’s home. Soon, the three men created rules, relying heavily on badminton. They kept in mind the original purpose, which was to provide a game that the whole family could play together.”

Why am I telling you all this?

Some say that if necessity is the mother of invention, boredom is the father. Indeed, two fairly recent studies conclude boredom propels us to states of deeper thoughtfulness or creativity: “Boredom might spark creativity because a restless mind hungers for stimulation.” Similarly, Fast Company reports, boredom “encourages people to explore because it signals that your current situation is lacking so it’s kind of a push to seek out something new.”

That’s good news, I guess, for everyone who suffers from periodic bouts of boredom.

But what if you are stuck twiddling your thumbs with nothing creative to show for it? Here’s what works for me: I try to lose myself in a good book or article.

That’s the situation I found myself in earlier this months when I fell down the rabbit hole of “oldie but goodie” New Yorker articles.

It started with David Grann’s superb “The Old Man and the Gun.” If you are a regular reader, you may recall I mentioned Grann’s riveting book Killers of the Flower Moon for your summer reading list. (I also enjoyed his earlier book The Lost City of Z.)

That was followed by the late Anthony Bourdain’s brilliant, brutal revelations of the unsavory side of restaurant kitchens, which he detailed in the essay “Don’t Eat Before Reading This.”

“If you are one of those people who cringe at the thought of strangers fondling your food, you shouldn’t go out to eat,” Bourdain cautioned readers. “By the time a three-star crew has finished carving and arranging your saddle of monkfish with dried cherries and wild-herb-infused nage into a Parthenon or a Space Needle, it’s had dozens of sweaty fingers all over it.”

The article was Bourdain’s first for the magazine. It proved to be a seminal moment in his career and was followed by a bestselling biography, Kitchen Confidential: Adventures in the Culinary Underbelly, and a series of popular food-and-travel TV shows.

Those two magazines articles should keep you busy for a while, but if you’ve already read them or are hankering for more, here are some articles you may enjoy:

Lauren Foster is a content director on the professional learning team at CFA Institute and host of the Take 15 Podcast. She is the former managing editor of Enterprising Investor and co-lead of CFA Institute’s Women in Investment Management initiative. Lauren spent nearly a decade on staff at the Financial Times as a reporter and editor based in the New York bureau, followed by freelance writing for Barron’s and the FT. Lauren holds a BA in political science from the University of Cape Town, and an MS in journalism from Columbia University.